In 2008, my mother was leaving Prague after living there for 18 years and was moving back to the US.  As a farewell trip, she and I decided to take the Trans Siberian railroad across Russia.  We have talked about it for years and decided it was now or never.

Monday, June 30:    Direct flight from Prague to Moscow,  but still they lost my big duffel bag!   (I should have realized this was an omen of things to come.)  Off came all the suitcases except the one that I have been packing and adding things to for the train for months!!  I was beside myself as you can imagine!!  The guy at the Lost Luggage counter, said “why are you so upset?  Haven’t you ever lost your luggage before?”  I almost hit him!  I said, “yes but I am getting on a train for 6 days tomorrow and this bag has all the stuff I need”  He assured me the bag would arrive later that day, but still I kept going over all the things I could replace and all the stuff I couldn’t if the bag didn’t come. (Food, books, scrabble, pillows/blankets, CD player, cleaning supplies, etc.)   But luckily around midnight it was delivered!

Tuesday, July 1:  Sightseeing in Moscow.  Not impressed.  The only thing of any interest is Red Square.  The rest of the city is drab, architecture wise.  Only the old buildings that are still standing from the Czarist days are of any interest.  And they do have beautiful parks and flower displays everywhere.   On Tuesday we were on our own and realized we could not get anywhere without a taxi.   Everything is ONLY in Russian (Cyrillic) – nothing is written in anything we could even decipher.   Unfortunately we could find no one who spoke any English – not even the young people do.  And they are not very friendly.  Finally found a receptionist in the lobby of a business center who spoke enough English to understand what we wanted and she called for a taxi for us.  Woman driver came!  (Unusual in Europe)  Took us to Red Square which was really fascinating.  Saw Lenin in his tomb and St. Basil’s Cathedral with its famous onion domes.  Also the GIANT G.U.M. store which used to be one gigantic state store but is now more of a mall with hundreds of luxury shops, even an Apple Store.  Went into a gourmet food store which was selling those small boxes of California  raspberries for $15!!   Red Square is smaller than it appears in pictures but is still quite impressive.

Tuesday: July 1 9PM:  Boarded the train (Trans-Mongolian Train #4)!!  The Trans-Siberian #2 to Vladivostok was boarding on the track next to ours.  It is a prettier train (blue and white) while ours is green. However we had very nice Chinese attendants who were friendly and very helpful.  Don’t speak much English but usually a smile and pointing got the message across!  Our compartment was just what I expected – two berths on one side, a seat on the other and a table by the window. It is carpeted and has a fan!  (weather was actually pretty nice along the way so it didn’t get too hot)  We shared a “shower room” with the compartment next door (occupied by a smelly old man who wore Depends!!  really, I am not lying.  He stayed in his room almost all the time and when the door opened, Wow!  the smell was horrible!  After he came out of the “shower” I would go in and spray perfume!  (One thing missing that we didn’t bring was Lysol spray – I had Lysol wipes which I used every day in there and in the toilet).  Anyway in the shower room is a sink and a spray hose (which didn’t work very well) and a drain in the floor.  You can hang your clothes on a peg and close the waterproof doors to keep them dry.  Then you pour the boiling water from a big thermos (filled from the samovar at the end of the compartment -the attendant does this for you) and mix it with the cold tap water (I stole the sink stopper from the toilet sink!)   Then pour it over yourself!!  That’s the shower.    The toilet is at the other end of the compartment and sometimes there was toilet paper and soap and sometimes not.  So luckily we had our own.  I used my Lysol wipes a lot! 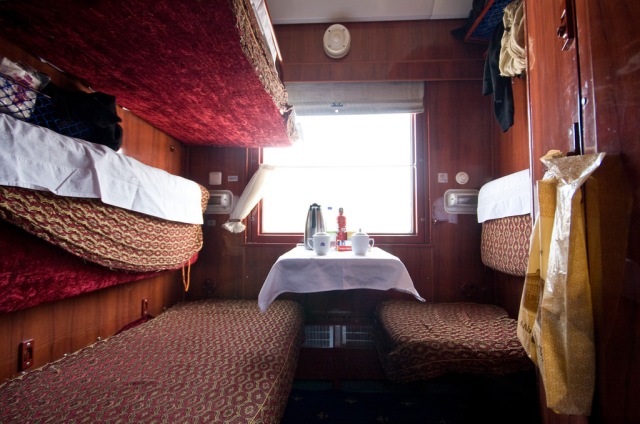 Took me a few tries to get up on the upper berth!  But once I got the hang of it, it was easy (as our friend Ryan, a Navy man, told me it would be!)  Glad we had brought our own lightweight comforters (all they had were heavy WOOL blankets!)  and pillows.   I am so glad we had the instant coffee (International Viennese Coffee) for the morning.  With hot water always available, we made our soup and oatmeal and coffee whenever we wanted.  We also had packets of cheese and crackers, peanut butter, trail mix.  There was a dining car 5 cars down from us which we made it to once (!) and had an omelet which wasn’t bad.  But we actually had more than enough food – supplemented by bottled water and bread bought from vendors on the platforms.  My mother kept hoping for homemade food from these vendors but that didn’t happen until we were way far East.  Until then all they sold were chips and sodas and other packaged snacks.
Anyway the first night we both slept like logs!  The movement of the train is very soothing – I was totally not prepared for this, as I worried beforehand if we’d be able to sleep with the noise of the wheels, etc.  But everyone we met had the same experience, and in fact we all took naps during the day as the movement of the train would make us feel sleepy!
I must acknowledge ‘the man in seat 61’ website as my go-to guide for this trip.  Highly recommend! (https://www.seat61.com)

Wednesday – Friday:  We followed our route on a big map I had brought to track our progress.  Mostly the scenery out the window is trees – white birch trees.   There are small villages we pass now and then but they are very poor looking.  Of course they may be nicer away from the train tracks but we couldn’t see that.  Crossed into Asia the second night on the train.  The train stops for about 15 minutes at various stations along the way (usually only two times a day).  We passed through Ekaterinburg (I saluted the Czars!) and later Novosibirsk which is the largest city in Siberia and quite nice looking.  Very modern.  We passed the time reading or playing scrabble or looking out the window at the scenery.  It was actually quite pleasant.  (Note:  the Ural mountains which separate Europe from Asia are not really mountains at all.  This was a surprise.  Just sort of hills.  You climb up for a while very gradually and then very gradually descend – you would not know you were in the Urals without looking at a map.)
Saturday at dawn:  Reached Irkutsk at 5AM.  If you’ve ever played the board game Risk you can appreciate how exciting it was to be in this city.

One of the main reasons I wanted to take this trip was to see Lake Baikal.  And we reached it just after dawn Saturday.  For many miles, until we actually caught our first glimpse of the lake, we could see a beautiful rainbow which we knew had to be over the lake itself.  The terrain here is the most beautiful of all we’ve seen – rolling hills, beautiful dense forests, mountains in the distance.  Finally the train reached the crest of a mountain and there was the lake in the distance!! What a moment!  The sun still low on the horizon and reflecting on the water.  This is the largest and deepest freshwater lake in the world.  The train skirts the southern edge of the lake for almost 200 kilometers so we got magnificent views all morning and into the afternoon.  It is so big it seems like an ocean especially with the waves breaking on the shore.   (double rainbow over Lake Baikal)

Once we left the lake, we traveled about another 3 hours to the Siberian “city” of Ulan Ude.  No vendors on the platform which made all of us passengers really mad.  The city is very big – spreads out forever it seems.  In about 5 hours we would reach the Russian/Mongolian border.   Where all our troubles will begin.